Earlier this year, I attended the Transport Summit  called by Amber Rudd, MP (now Home Secretary), in Hastings, (18th March 2016). I went along as it was the only non-A27 focused transport meeting I have heard of in recent years here in Sussex. I also wanted to hear what the speakers from Network Rail, the rail operator Govia Thameslink, the bus operator Stagecoach and the government’s Department for Transport had to say.

It is interesting to note that at this March meeting there was no mention at all of the wrangle which was already going on between the Department of Transport, Govia Thameslink (GTR) and the RMT union over Drive Only Operated trains and the role of the Guards/Conductors. 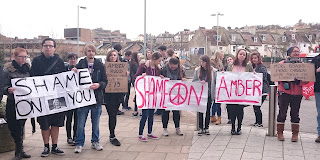 Outside the building there was a protest against Amber Rudd both before the meeting and after. Clearly there are some strong feelings locally. There was a significant police presence both inside the nearby station and just across the road from the campus building. I understand that some people who had applied for tickets were turned down although in fact there were spare seats in the seminar room. This was a very tightly controlled meeting.

Although I’m critical of the Hastings and Rye MP's efforts to use this summit as part of her marketing and PR campaign without addressing the actual problems, I must congratulate her on actually holding a transport meeting. I think the local MPs in Brighton and Lewes should follow suit. If any area needs the transport and rail problems being looked at it is Brighton & Lewes who suffer from all of the problems of the Brighton main line.

In summary I thought the meeting was a great PR job by Amber Rudd, the local MP for Hastings and Rye, but lacked substance and despite this lack of substance she had positive feedback in the Hastings Observer. It was a glossy marketing show with all of the speakers praising and thanking each other. The timetable was very controlled and questions were limited by the very smooth operator – Ray Chapman of the East Sussex Rail Alliance who seemed to be part of Amber Rudd’s team rather than the chairman of an independent group. Very little time was allowed for questions. In fact the whole meeting was over in two hours. I stayed on to put questions to Network Rail. If local people thought they were going to be able to voice their concerns and hear senior directors and politicians committing to taking action I think they must have been severely disappointed.

Amber Rudd opened the show, sorry 'summit,' with some fine words but seemed to take the opportunity to have a dig at the Department for Transport over the delays in implementing the Hastings Express rail service. She also referred to the dualling of the Pembury bypass and the Bexhill to Hastings Link Road. However to give due regard to her, at least she’s holding a transport conference.

Ray Chapman East Sussex Rail Alliance (ESRA)
After Amber spoke we were back to the smooth talking Ray Chapman who took over and guided things through from start to finish ensuring that everybody spoke for their allotted short amount of time and questions were grouped and limited. In his opening remarks he talked about the Brighton main line being the most congested network in Europe and said there were now no margins for error and even a slight hold-up can cause lots of problems. He referred to a recent parliamentary meeting and said that the three Brighton MPs didn’t even turn up!

Charles Horton, CEO of Govia Thameslink
He followed the previous speaker's theme by talking about the network being at capacity. He then went on to talk about boosting capacity which didn’t seem to sit well with his other remark when he said they were trying to “squeeze trains into a constrained infrastructure.” He admitted that the reliability of services was an issue and that punctuality is a challenge.

Alex Foulds, the Passenger Service Director of Southern Railway
He referred to a series of points:

He summarised by talking about some local improvement and some current problems.


David Statham, the managing director of Southeastern Rail
Mr Statham then took the floor, and like other speakers, he talked about performance being a particular challenge. He added that they had had particular difficulties since Christmas and added that the impact of failures had had a substantial effect on the network. He then went on to talk about some detailed plans in Kent.

Paul Best, Senior Strategic Planner for the south-east at Network Rail
Paul Best then spoke. He talked about Marshlink which is an important issue to the east of Hastings. As far as I could detect he didn’t give any positive dates or highlight any major improvements. It seems to me the policy on the line towards Ashford from Hastings is one of incremental steps. However it wasn’t clear what those steps are. Mr Best made reference to electrification and looking at trains that could run as diesel/electric and also battery/electric. Though he was trying to do his best it seemed to me that there was no clear way forward as to how the line was going to be improved. In part of his talk he referred to route studies and Route Utilisation Strategy (RUS) Studies. It seems the RUS studies really form a kind of ‘wish list’ in the hope that the government will allow some of them to go forward. Route studies are really the detail around this and also cover some more practical solutions at a lower level. None of the discussion around either of these actually helps the public understand where we are with Network Rail.  After the meeting I questioned Paul Best about the restoration of the Uckfield to Lewes line and he was depressingly frank with me saying that the government are completely focused on HS2 at the moment and until that’s under way they won’t look at anything else. So, it looks as though any significant improvements, like the Uckfield to Lewes line, in the south-east will be kicked into touch until possibly 2033 or beyond! Not what I wanted to hear.

Huw Merriman MP for Bexhill and Battle
Huw Merriman, a new MP, spoke next - he was upbeat and positive but very little information came forth except to say that he was campaigning along with Amber Rudd for extension of the HS1 (high-speed line in Kent) through to Sussex. My take on HS1 is that without significant infrastructure improvements and a second track between Sussex and Kent the possibility of volume high-speed rail services will remain just a dream. Huw referred to his lobbying efforts towards the Rail Minister. He referred to his membership of the Transport Select Committee.

NB: Claire Perry is responsible for: rail major projects and growth, rail infrastructure, safety and security, passenger services, strategy, funding and sponsorship, integrated delivery and accessibility, rail fares and ticketing.
It’s a pity she wasn’t at the meeting! Claire resigned in July 2016 and Paul Maynard MP has taken over.

The meeting facilitator (Ray Chapman) then took over again and managed to impart some bad news about the Metrobus to Gatwick being withdrawn. He quickly went on to talk about finding alternatives.

Matthew Arnold from Stagecoach
Matthew Arnold from Stagecoach then spoke. He had only just joined the company so had a limited amount of information. He said he was waiting for bus priority measures, whatever that is, between Eastbourne and Hastings in relation to the new Bexhill to Hastings link road. His talk included a few points about providing services between hospitals and services to the Conquest Hospital. One positive point he put forward was that in country areas he would be looking for the provision of smaller buses for narrow country roads. He also mentioned the introduction of buses which will meet the new European lower emission standards.

I really don’t know why he was there presenting the case for the driverless vehicle as I can’t see it helping transport issues in the short and medium term. In fact afterwards I spoke to him and he was talking about 15 years before we would see them being introduced. After the meeting was over there was an opportunity for people to see a driverless vehicle. It was positioned outside the Sussex Coast College building. In part of his speech he made a point about the driverless vehicle helping transport problems for villages in rural areas. Afterwards I queried him on this saying that firstly the government would have to restore the funding to provide the money for all the potholes in country areas so that the driverless vehicle didn’t hit a pothole and end up in the ditch! We both had a laugh over this point. However I believe that talking about driverless vehicles will not solve the problems for people in East Sussex and Hastings area over the next two decades.

Andrew Jones, MP Transport Minister
The last speaker was Andrew Jones, MP. He talked about the dualling of the A21 but then focused on the work which is currently going on to develop a road investment strategy. He said that real progress was being made. He said that Highways England are producing their priorities with a view to them being published in March 2017. He pointed out that local councils and local people will have the opportunity to make an input to the road priorities proposals.
[Andrew Jones MP is Parliamentary Under Secretary of State for Transport and has a mixed bag of responsibilities including Northern Powerhouse, national roads and Highways England, bus policy and devolution in England]

Question Time
The first questioner referred to the optimistic future ideas being spoken about at this transport summit but he then went on to ask about how we deal with problems we have currently. This was followed by a few other questions on a similar vein with some quite smooth answers being given. In answer to the question about electric trains one answer was given that Claire Perry had promised to look into the new types of hybrid trains. Amidst the questions about electric trains reference was made to the Javelin electric train although there seemed to be no conclusive answer given.

In answer to a question relating to roads, Minister Andrew Jones said the government was moving towards allowing decisions to be made as near as possible to the local area which is affected. I must say this doesn’t seem to line up with the way in which Highways England are operating with regard to the A27 'improvements' in West Sussex currently!

There was a question from a representative from the Campaign for Better Transport who said he was absolutely staggered at the high cost which members of the public are asked to pay for their rail services and asked for prioritisation for commuter transport.

Steve Hardy of the CPRE asked for a station at Glyne Gap and for the Willingdon Chord to be reinstated. The response was given by Ray Chapman of the East Sussex Rail Alliance group who offered support but actually have no power over such matters. There seemed to be no ministerial take up to support this request.

Right near the end there was a question from a lady who commutes regularly to London and complained bitterly about rail delays and asked for something to be done about this. Again our master of ceremonies Ray Chapman smoothed over this serious complaint but not before she got a round of applause. 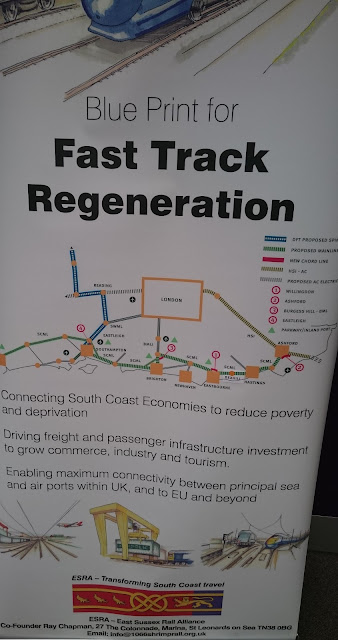 PS:  The poster at the entrance to the room was titled Fast Track Regeneration. It featured high level diagrams of the rail network and listed underneath key issues such as:

None of these things were actually discussed and there were was certainly nothing said by any of the speakers that anything was going to be fast tracked!

The new Bexhill to Hastings Link Road (referred to in the summit) Earlier this year, I attended the Transport Summit  called by Ambe...